The case of Bradley Manning versus the US military and the implications for whistleblowers.

Written and Performed by Graham Nash and James Raymond

The release is timed to Manning’s first judicial hearing scheduled for December 16th, following more than 17-months in custody, including a year in solitary confinement that Amnesty International has characterized as “harsh and punitive.”

Visually, the Almost Gone video is punctuated with bold graphics, disturbing images and harsh facts. Its release is scheduled to precede Manning’s pre-trial hearing on December 16, which is the day before his 24th birthday. The Bradley Manning Support Network has named the following day, December 17, its International Day of Solidarity (http://events.bradleymanning.org/). PFC Manning, an Army intelligence analyst who had been stationed near Baghdad, was arrested in May 2010 under suspicion of leaking classified information, including a video showing the killing of civilians, to the anti-secrecy website WikiLeaks.

Nash and Raymond composed the song “Almost Gone (The Ballad of Bradley Manning)” during this spring’s US tour of Crosby-Nash, and the new recording serves as the music bed for the video; it features an impassioned lead vocal by Nash, a two-time Rock and Roll Hall of Fame inducted (Crosby, Stills & Nash, and The Hollies). “Bradley Manning is a hero to me,” he sings, acknowledging Manning’s role in making public videos and documents that shed light on such as issues as the true number and cause of civilian casualties in Iraq, human rights abuses by U.S.-funded contractors and foreign militaries, and the role that spying and bribes play in international diplomacy. 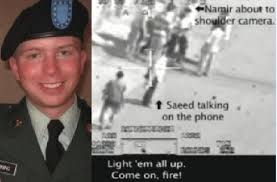 The pretrial military hearing for accused Army whistleblower Private Bradley Manning has entered its sixth day. Prosecutors have finished laying out their case, and today the defense witnesses are expected to testify. Manning has been imprisoned for the past 19 months for allegedly leaking classified videos and diplomatic U.S. cables to the website WikiLeaks. On Monday, military prosecutors claimed they had discovered what they believe is email correspondence between Manning and WikiLeaks founder, Julian Assange. If convicted, Manning could face life in prison, possibly death. Democracy Now! hears an update from Ed Pilkington, a correspondent for The Guardian, which has been blogging about the hearing since it began last Friday. “[The defense is] claiming … that Manning has not been given the right to a fair pre-trial hearing because we think they are only likely being allowed to call three witnesses. Now that’s in addition to 10 witnesses they shared with the prosecution. But it’s still a tiny number compared with a total of 48 that Manning’s lawyer … asked for,” Pilkington says. “If, by contrast, the defense is only allowed to call three of its own witnesses, that looks pretty unequal to me.”

My Head is in the Clouds